as warm as sun on robin’s breast
as soft as yarn in blackbird’s nest
as cool as breezes when they blow
as white as gentle flakes of snow
as tasty as sunflower seeds
or nasty as tough bitterweeds––
polecat babies in black and white,
who stir a stink in dark of night
tornado winds that scalp the hills
and crack the eggs of whippoorwills––
a “fraidy hole”––a cellar deep
where even greenish frogs can creep
a rain surprise in hasty splash
that brings forth thunder with a flash
newborn kittens in loft of hay
song of sparrow at end of day––
dogwood blossoms in Arkansas,
a welcome time chock-full of awe.

Wild violets grew in the woodlands surrounding my homeplace at Banner Mountain. 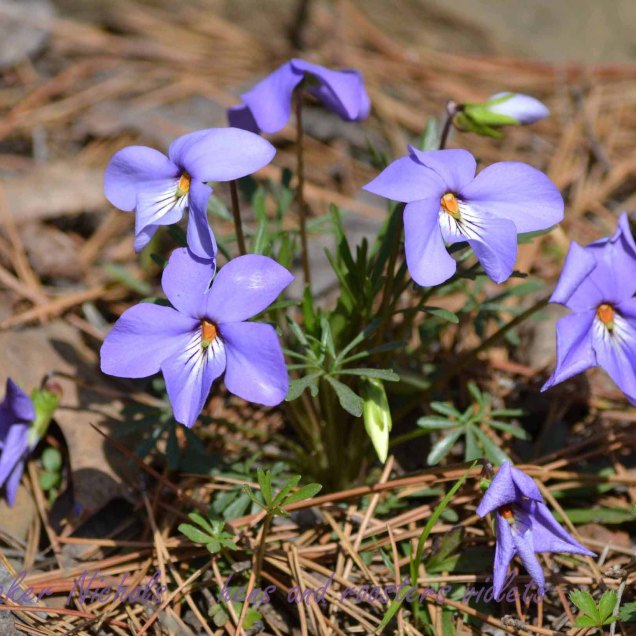 Thinking of the wild violets, I remember how we children played a game using the flowers. We picked some of the violets and when we hooked two blooms together and pulled on each stem, one of the blooms snapped off its stem. We called them rooster flowers and that was a pretend rooster fight. Always a winner in that game.

I still recall the day my brother, Billy, brought home a little bantam rooster. Billy set him down in the barnyard.  And right away a big rooster ran over to the little rooster and began a fight.  Bill picked up a chip of wood and threw it at the big rooster. The chip of wood struck the big rooster and he fell over dead!  What now? That was Mama’s big, old rooster. Oh, no! I witnessed the entire event. Looking back, it was the only way that Billy could save his little bantam. The only way. Even though I saw it all, I was never called in to testify as to what had happened to Mama’s rooster.

And now, after all these years, I don’t remember what happened to the bantam rooster either. Did he grow old and die a natural death? I guess that’s not important. Perhaps my brother remembers. Sometimes a writer’s memory is called to a task of embellishing certain experiences. But not this experience. I can tell you that the chip of wood buzzed as it whizzed toward that bullying rooster!  Billy really didn’t mean to kill the big ,old rooster; he only meant to protect the little one.

Beauty is many things. It is the sun rising above the timberline to give its light to a dark and waiting world. It is the sound of a loved one’s voice when an eternity has elapsed since you last heard the familiar echoes in your heart. It is the violet beside the road, the Sweet Williams, the rose petals and budding oaks in spring. It is the voice of a friend when you need someone who understands. There is a secret– the beholder of beauty must open not only his eyes but his heart if he is to see the total realm of beauty. Like the ivy across a trellis, beauty and love intertwine, the one depends upon the other. Together they stand out in all their splendor.

Years ago, when my second-grader brought home a page of grade-school art, I displayed his masterpiece on the refrigerator door.  By looking at his creation done in crayon, I wrote a poem when I was enrolled in a creative writing class at the University of Central Arkansas. The poem was published in the university’s literary magazine, “The Vortex.”  My first published poem!  Double joy, since it was inspired by my small son’s class project.

The blue clouds drift slowly
in mid-air, with nowhere to go.
The bluebird flies purposefully
between the clouds, over the trees,
and westward.
The silk violet stands waiting . . .
a small hand reaches down.
Lips form a smile,
a voice says, “thank you.”
The vase holds violets, green stems,
and love.

My first published poem was the spark that ignited my desire to continue writing and publishing poetry. This simple, short poem in free verse is one of my favorites. Do you have a favorite poem? If so, what form was used to create it? Is there a poem you remember from childhood that still rings in your memory?

The blue clouds drift slowly
in mid-air with nowhere to go.
The bluebird flies purposefully
between the clouds, over the trees,
and westward.
The silk violet stands waiting . . .
A small hand reaches down.
Lips form a smile,
A voice says, “thank you.”
The vase holds violets, green stems,
and love.
c Copyright 2012, Freeda Baker Nichols
From Vortex, 1978