The Sin of Lee Henry and Matilda

Lee Henry Hammond swore he’d kill that bird.
Without a pause, it whip-poor-will’d all night
outside his bedroom window.  “It’s a sin
to kill a mockingbird,” Matilda said.
“This bird’s a whippoorwill,” reminded Lee.
He quickly took his rifle from its case.
“Oh, no! don’t shoot the bird,” Matilda begged.
Lee paid no mind and stepped out to the porch.
“Now, go to bed. I can take care of this,”
he said.  His wife reluctantly obeyed
but stayed awake in case he needed help.
And soon he yelled, “Matilda, bring a light.”
She ran to him with flashlight shining bright.
Lee pointed to a tree beside the house.
She cast the beam upon an oak tree’s bough.
The light reflected beady, blazing eyes.
Why must I help him kill this whippoorwill,
Matilda thought, but knew the reason why.
Her wedding vows had brought her to this task.
She’d promised to obey and duty-bound
she shut her eyes and shone the glowing light.
Kaboom! The pellets blasted through the leaves.
Wings flapped away to nearby tree of thorns.
Lee grabbed a slingshot, stuck a stone inside.
“Come quick!” he shrieked. “Matilda, shine the light!”
Matilda beamed the ray upon the bird
which called once more before the blow that felled
it from the thorn tree’s highest limb.  The thud–
when whippoorwill contacted rocky ground–
caused sudden chills to frost Matilda’s heart.
“It was a sin to kill that whippoorwill!”
She lay awake and worried for their fate.
Lee Henry Hammond smiled himself to sleep. 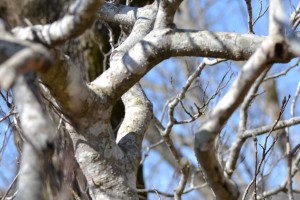 John Henry Hammond swore he’d kill the bird
that whip-poor-willed each night without a pause.
For countless nights it kept John from his sleep.
“But it’s a sin to kill a mockingbird,”
John’s wife, Matilda, said, fear in her eyes.
That was a saying she had often heard.
This bird’s a whippoorwill and warped,” John said.
“That’s why his piercing shriek goes on all night.”
“Be careful with that gun,” Matilda warned
as John went out with rifle in his hand.
“Now go to bed, Matilda,” John advised.
Reluctantly, Matilda did as told.
She stayed awake in case John needed help
and soon he called for her to bring a light.
She ran outside with flashlight in her hand.
John pointed quickly to the water oak.
She bounced the beam upon the tallest limb.
The light reflected bright red, blazing eyes
as round as copper pennies, flashing fire.
“Why must I help to kill this whippoorwill?”
Matilda asked but knew the reason why.
Her marriage vows had lured her to this task.
“I promise to obey,” she’d said to John,
and duty-bound she firmly held the light.
Kaboom! The pellets scattered into leaves;
wings flapped away to nearby tree of thorns.
John ran inside, brought back an old sling-shot;
he loaded it with sharp and deadly rocks.
“Come here!” he yelled. “Matilda, shine the light.”
Matilda beamed the light upon the bird.
It shrieked once more before the blow that felled
it from the thorn tree’s highest limb. The thud
of feathered bird’s soft body hitting hard
was like no sound Matilda ever heard–
then silence raked across her heart with guilt.
“It was a sin to kill that whippoorwill,
John Henry Hammond!  Shame for what we’ve done!”
She lay awake and worried for their fate.
John Henry Hammond smiled himself to sleep.