(Homeplace from a painting by Yvonne Baker Hall)

As I remember Banner Mountain in the springtime, I think of how the apple blossoms and plum blossoms greeted me as I returned from school. I might not have noticed the fresh blooms in the orchard as I left the house to walk up the trail to the Banner School. But always on my return, the orchard welcomed me back home from a day of “readin’, writin’, and ‘rithmetic” and playing with my friends. 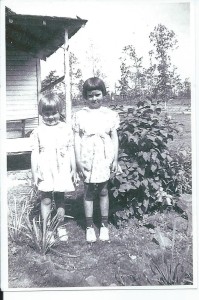 Yvonne and I at the homeplace, standing between the daffodils and the lilac bush. With two years difference in our ages, we were inseparable. Mama said that when I started to school that Yvonne was very lonely. She’d go outside and call for our dog, named Rusty. “Here, Rust! Here, Rust!” In a couple of years, though, Yvonne joined me on the walk to school. As time went by, Rust met his fate although I don’t recall when or how he died. Another dog named Fuzzy came into our lives, and he was allowed to go with us to school. He waited around for us until school was out and he hurried along as we headed back home.  At the close of school for the summer when certificates were given to those completing the eighth grade, Fuzzy received a certificate, too. I don’t know how much Fuzzy learned but he was well-behaved and friendly to all.

The lilacs, the daffodils, and the orchard’s pink and white blooms were such a pleasant sight–the memory of which I still cherish from long-ago spring-times on Banner Mountain. ~~Freeda Baker Nichols 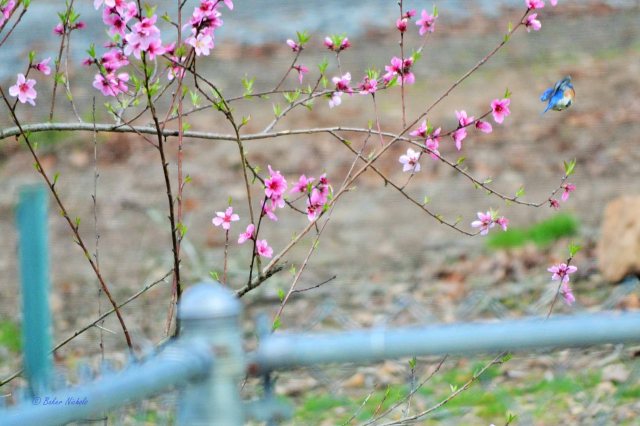