This red-bellied woodpecker has grabbed a bite of food and is lifting off in flight to wherever he is nesting. The ever-present sparrow at the lower right corner of the photo huddles quietly, awaiting the departure of the bossy woodpecker. Blue jays are often rude and aggressive wild birds, but even they move away from the woodpecker when he flies in. 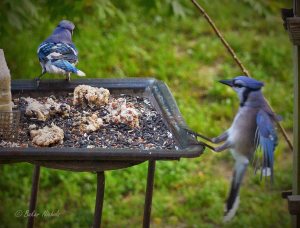 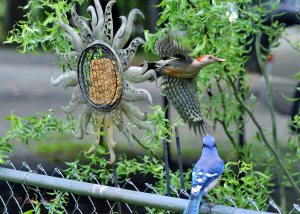 I don’t recall woodpeckers at Banner Mountain. But they probably were there. My favorite birds were the mockingbirds and the whippoorwills. I remember the red-tail hawk that circled the sky, whistling, and looking for chickens to catch. Mama sent me outside many times to scare the hawk away. We had lots of sparrows around our homeplace. And there were quail. Crows, too, and owls. The hummingbirds were the most entertaining. They hovered over the honeysuckle and raided the sweet nectar in the colorful hollyhocks that Mama planted by the garden fence. Once I found an abandoned bird’s nest that hung down from a limb like a sock.  I don’t know what kind of bird built the nest. But it was an awesome find for a child who would grow up to become a writer with a big imagination.