At the Hemingway-Pfeiffer Museum and Educational Center, I put my pen to  paper to write and I look around, thinking, “Hemingway was actually here in this barn-studio, in this house, on these grounds.”  I’m impressed and excited when I think of that.  After all, he received the 1954 Nobel Prize for Literature.  And I love his story, “The Old Man and the Sea.”  If only I could write like him.

In June of 2007, I attended my second Writers’ Retreat in Piggott, Arkansas and signed up for the next one.  Because writing is a lonely job, it’s encouraging to gather with other writers.  The Retreat inspires writers to reach toward goals at their own pace, in their own way.  I always leave eager to create new stories as well as finish my stories-in-progress,

At one of the retreats, I set my goal to finish my first novel at the end of 2010, but it was one year later that I completed “The Call of the Cadron,” a 200-page fiction, set in Arkansas. In May, 2012, I had a printed copy in my hand. My self-publishing experience has been both rewarding and successful.

In November 2012, the staff at the Writers’ Retreat in Piggott, Arkansas hosted a book signing for me, along with two other authors, Donna Austin and Jo McDougall.

This year of 2013 is the first time  in seven years I’ve missed attending the Writers’ Retreat in Piggott. Sometimes other things become my priority, but writing is my destiny and always on my mind and in my heart.  The poem below is one I wrote at the Retreat and it was published in the Retreat’s brochure.

Although I try, how can I write like him,
a writer honored with the Nobel Prize?
I watch the robins light on dogwood limb
and hear the sorrow in their constant cries.
Have they descended from red-breasted birds
that looked for worms in cool of early dawn
and sang contented songs with smoothest words
when Hemingway once strolled across the lawn?

Today, I write from break of day to dark,
not far from Ernest’s barn loft studio,
beside an oak where lightning cracked tough bark.
Goodbye, great oak.  How sad you have to go!
If I create one sentence that is true,
might I be worthy of the Nobel, too? 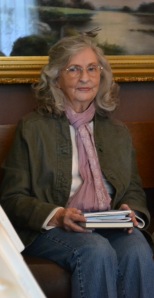 Cat and kittens at Hemingway’s Barn Studio in Piggott, Arkansas